Get to Know Joanna

Joanna has been a professional athlete for sixteen years, and has utilized her platform to impact people around the world. She is a professional speaker for leading organizations such as the Department of State, Proctor and Gamble, Tedx, and Muse. She also serves as a Sport Diplomat, traveling the world and running programs in less developed nations that promote gender equality, conflict resolution, cultural understanding, and economic development. She has helped individuals and groups find their cool by living an unabashedly authentic life based around deep-rooted acceptance and discovering a comfort in her own skin

The Uncomfortable Ride to the Top

Presented Oct 15, 2014
During this TEDx event, Joanna discusses her anything but smooth professional soccer career.  With minimal salaries, no job security, and constant instability, the women’s professional soccer reality is an uncomfortable one. Joanna’s willingness to persevere through difficult circumstances has proven that following your dreams and doing what you love is worth any sacrifice.

In June, 2019, when Joanna retired from the Washington Spirit after four seasons, and a 16-year professional career, she was the first player to have her number retired in team history. Lohman, a Maryland native has nine caps with the United States Women’s National Team and began her professional career after a decorated four years at Penn State University. After graduating with honors in 2003, with no domestic professional league in place, Lohman spent time overseas until she was drafted by Saint Louis Athletica of the WPS during the 2008 WPS General Draft. Lohman did not want to leave the DMV, so she was then immediately traded to the Washington Freedom.

Lohman first joined the Spirit in 2015 and played 17 out of 20 matches in her first year with the team. In the 2016 NWSL season, Lohman propelled the team to a championship appearance by playing in all 20 matches plus the playoff semifinal. Also in 2016, Lohman scored four goals which was good for second-best on the team that year. Her most spectacular goal came against the Boston Breakers, a bicycle kick in the 2016 season opener.

In the first game of the 2017 NWSL season, Lohman suffered a season-ending ACL tear in the 11th minute but fought back through intensive rehabilitation to return at the beginning of the 2018 season fully healthy and scored the Spirit’s first goal of that season against Seattle. In the final game of 2018, Lohman was named the honorary captain of the Spirit.

Before her time with the Spirit, Lohman’s career saw her in clubs around the United States as well as around the globe. Lohman had a stint in Spain’s women’s league, La Liga Feminina, for RCD Espanyol in 2011-2012; Sweden’s Balinge in 2008 and the Philadelphia Independence in 2010-2011 just to name a few. 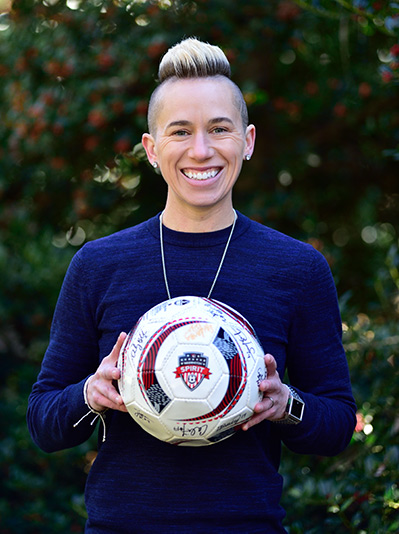 "Joanna is a bold and dynamic force for good. Her courage to fight for social justice, live authentically and inspire others to do the same is at the core of her commitment to create tremendous positive change."
Billie Jean King
Founder, Women's Sports Foundation